Making easy sew costumes for children or adults is a fun and imaginative way to save money and indulge your creative side as the same time. Costumes for holidays, plays or other events are usually simple, relying more on props than the actual costume for effect. In addition, most costumes are easily alterable to accommodate other situations as well. For example, you can use a tutu for both a ballerina or fairy costume. 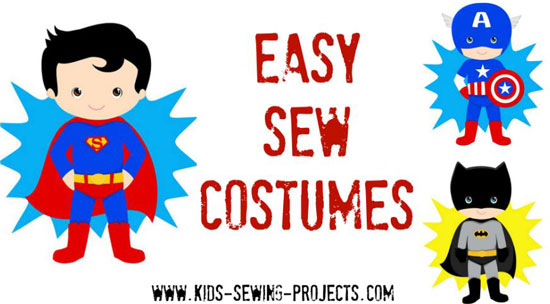 Additionally, a red cape easily functions as both a Superman or Little Red Riding Hood costume, which saves you time from creating a whole new costume. 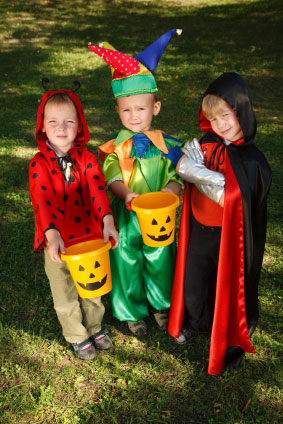 Reuse an old tshirt or one with a logo on it for this simple cape. Leaving the neck intact, start cutting front from the back at the side seam. Cut off sleeves and leave 3-4 inches of the front neck hole. Continue cutting off opposite sleeve. Until you have a neck line and the back of the tshirt left. Slip neck hole over the head and you have an easy cape. Decorate the back of the cape (t shirt) as you'd like. *If there is a logo you want to use for the cape, cut so the side with the logo is intact and the back will only be the neck hole. 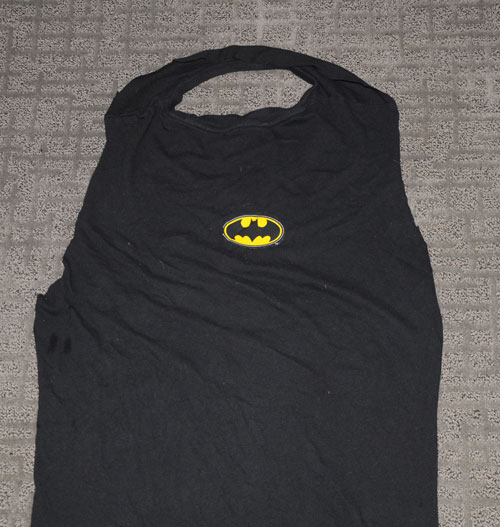 No Sew Cape with Scalloped Edge

Make a witch dress out of current black dress and top with a witch hat
Make a devil costume out of a red dress and add red horns on a headband. 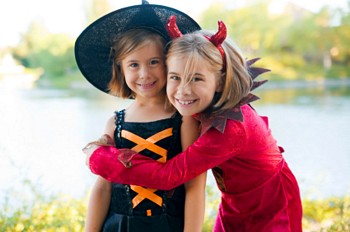 This fairy costume works well for not only a fairy, Tinkerbell, ballerina, princess or a good witch. 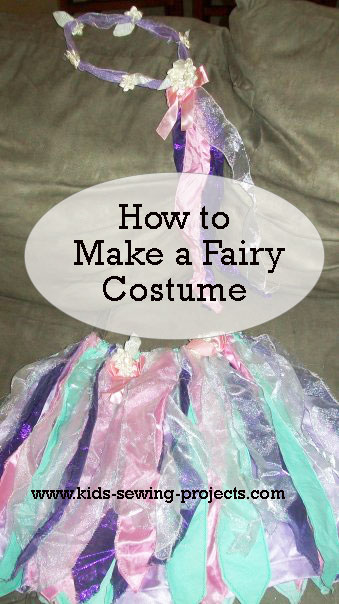 Easy sew costumes include bumblebee or other insect costumes because most insects are recognizable by wings, which are simple to make. The costume requires:
First, measure the childs shoulder width. Cut material for that length and add 12 inches more. Pieces of the fleece should be about 4- 1/2 to 5 inches wide. Sew together the strips of yellow and black, alternating colors. Make two squares of these strips. Then attach the squares by sewing the sides together however leave holes for the head and arms. Attach pipe cleaners to a black headband.

Most easy sew costumes are costumes on which small decorations need glued or pinned. This is a nice, non-scary costume for a girl at Halloween. The materials required:
Sew leaves and flowers onto the skirt as decoration. Glue smaller flowers and leaves to the facemask. Make a nest from twigs and place the bird into the nest. Sew this on the shoulder or make a hat using the nest. Use your imagination to enhance the costume. Mother Nature easy sew costumes are also convenient for trick-or-treating because the child can wear pants under the skirt if it is chilly.

Purchase red or green tights, an extra-large green or red sweatshirt, and a striped turtleneck. Make a vest from the sweatshirt, cutting the sleeves with a pair of zigzag scissors. Sew ribbon or lace around the sleeves and on the vest. Use a wide ribbon as a belt.

Either purchase or make an elf hat by cutting triangles from green felt. Sew these pieces together to make a "cone" hat and attach a tassel, pom-pom or bell at the top. Make elf shoes by tracing feet onto a piece of paper and using this as a template when cutting felt for wearing indoors or cutting felt to fit over a pair of shoes for outdoor walking. 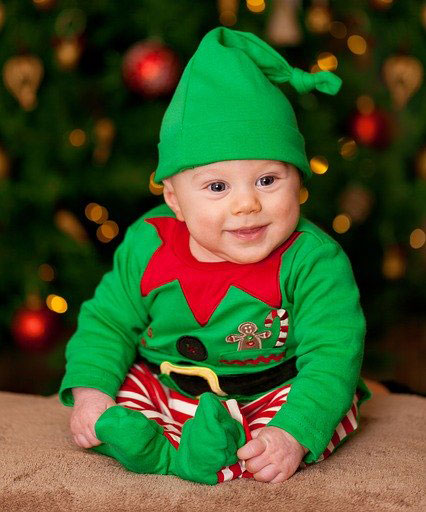 I got this extra fabric from a friend. I had no idea what to do with it until I saw an M&M. All I did was sew 2 circles around a hula hoop. We called my children the fuzzy M&M's. At school, the kids loved them and they were a huge hit. The next year, we went to an assembly. At the assembly, the principal asked the children what was the best Halloween costume they had ever saw. The kids shouted out, "the fuzzy M&M's" and I just smiled like any proud mother would.

This easy sew costume idea would work well leaving a hole at the top and bottom and two arm holes for the child to wear the costume. Then cut a large letter M out of white felt. Hand sew on the front of the circle. Make a pumpkin costume Using the same idea above for the M&M you can create a pumpkin by using orange fabric. Add green felt eyes, nose and mouth.

Many costumes are considered "no-sew" costumes, or are easy sewing costumes that just require very little sewing. Some costumes include masks, which are usually easy sew or no-sew type projects.

Creating a lion mask using a paper plate, brown, yellow and orange streamer rolls for the mane and eye stickers takes little time. For children who do not like to wear masks, you can glue a wooden craft stick to the mask so the child can simply hold the mask in front of his face as well.

A princess costume can be made easily by dressing up a current dress your daughter has. Make a princess hat by creating a basic cone shape hat out of sturdy cardstock or poster board. Add a long strip of lace out of the top that flows down to the shoulders. Add a feather boa, play jewelry and some fun shoes and she is set. This makes a no sew Halloween costume that will be ready in a hurry.

Sweatsuit costumes make great easy sew costumes or even no sew costumes.
To make a felt hat, measure around the child or adult's head (whomever the costume is for) Cut out a triangle piece of felt with the base being the above measurement. You can make a pattern on paper first or draw on the felt with a pen to make an accurate size. To sew together, place two ends of triangle together and sew along edge. For Peter pan add a feather out of the top.
This type of hat will also work for Robin Hood.

How to Sew Help

~About ~ Build a website ~Contact Us ~Disclosure ~ Privacy ~ Project Index ~ Terms of Use
Copyright 2007-2022, Debbie Madson, Madson Web Publishing, LLC
All rights reserved.
The material on this site is for educational purposes.
Nothing on this page is public domain.